West End:  24 Great Crested Grebe – no obvious signs of nesting yet; 17 Grey Heron – many of the young from the heronry have now fledged, they can be easily identified from the adults and can be seen around the reserve; 2 Mute Swan; 1 Buzzard which is usually mobbed by the 2 pairs of Common Terns on the rafts.  15 Swallow, 1 Moorhen, 1 Coot. A Blackcap is regularly singing in the Car Park and a Song Thrush is still singing loudly. Jackdaws are often flying over as a couple of pairs are nesting in the reserve.

Whillets: Alastair who is one of our official transect butterfly and dragonfly recorders reported the following from the meadows –  2 Dingy Skipper Butterfly, 1 Broad-bodied Chaser Dragonfly, 1 Red-eyed Damselfly and a Silver Ground Carpet Moth. 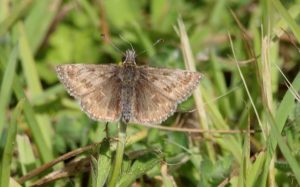 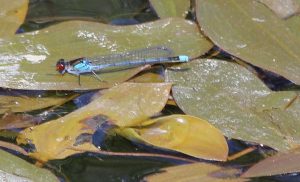 Red-eyed Damselfly
25 May 2015 by Alastair Gray 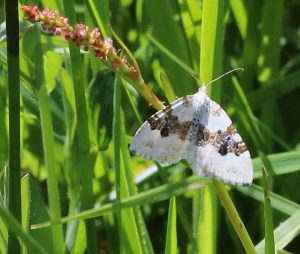 The report on our Members Walk can be read by clicking HERE.

Whillets: Alastair who is one of our official transect butterfly and dragonfly recorders reported the following from the meadows –  4 Burnet Companion Moth, 1 Mother Shipton Moth (both day flying moths) and 1 Dingy Skipper Butterfly. 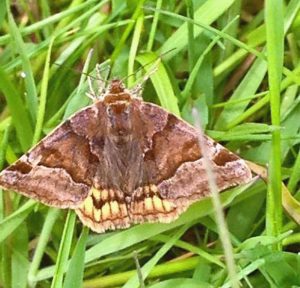 At the Dam End: We started the BTO WeBS survey at 8 am at the dam wall which produced 1 Little Ringed Plover, 1 Common Sandpiper, 2 each of Grey & Pied Wagtails and 10 Canada Geese including a family with 4 young (see photo below). On the water were: 2 Mute Swans, 2 Coot, 4 Moorhens, 2 male Tufted Ducks, 1 Mandarin, 32 GC Grebe, 1 Grey Heron and 20 Mallard. In the air were: 6 Swifts, 2 Swallows, 4 House Martins and a Buzzard being mobbed by a Crow. By the lagoon were 2 more Mallard and nice views of singing Garden Warbler. In the nearby bushes were: several Blackcaps, Whitethroat, Chiffchaff, Song Thrush and a male Bullfinch. A walk around the paddock added: a singing Skylark, a Green Woodpecker, several Goldfinch and a flyover Little Egret. Finally a Goldcrest was seen in the car park.

At the West End: Starting around 10 am we added: 25 GC Grebes, 2 Mute Swans, 1 Herring Gull, 2 Moorhen and 11 Mallard plus one pair with 4 ducklings. 2 pairs of Common Terns were on the rafts. Only 22 Grey Heron could be seen but these included a white-plumaged individual. On Pintail Bank were: 4 Cormorant, 7 Canada Geese and 1 Lapwing. 2 Buzzard and 2 Stock Dove were flying. A terrapin was sunning on a potential grebe nest near the water’s edge. Later 2 Kingfishers were seen. By lunch time the sailing boats had pushed most of the GC Grebes into the undisturbed nature reserve and a high count of 55 was taken.

At Whillets: From late morning: a Reed Warbler was seen and a pair of Canada Geese are nesting at the pool. The survey includes the restricted area meadows, which added: several Whitethroat, a male Reed Bunting, 5 LT Tit, Garden Warbler, Blackcap & Chiffchaff. A quick look under the corrugated metal sheets in the meadows revealed: 4 Slow Worms, 2 Grass Snakes and a Toad. A Beautiful Demoiselle damselfly was seen flying. 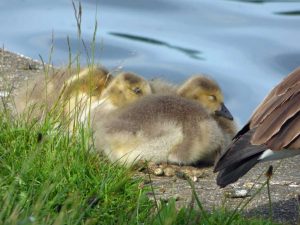 West End:  A late afternoon visit gave nice views of the White plumage Grey Heron standing with several Cormorants on Martins Island plus a Little Egret was on Pintail bank.  The Heronry is still very active although some nests are becoming vacant as young start to fledge and any unsuccessful nesting pairs decide to abandon. A Kingfisher was seen flying carrying a small fish. A Buzzard was being mobbed by Terns. A pair of Swallows were feeding close on an increasing swarm of mosquitoes hovering just above the water surface, whilst a duet from Song Thrush and Blackcap was coming from the Car Park.

West End: 2 pairs of Common Tern, one pair seen carrying out bonding display and food passing whilst on the nesting raft –  A good sign this pair will attempt to nest on the rafts.